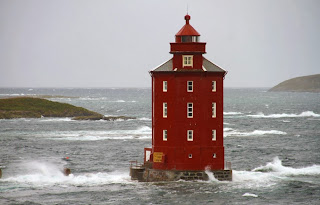 This the first time I have featured a lighthouse in Scandanavia. I was fascinated by this red brick structure located on a small island which, at high tide, reveals only the lighthouse. It was built in 1880 and automated in 1987.

www.lighthousesofnorway.com
Posted by genevieve at 1:34 PM No comments:

For 2014, I want to speak out more about issues that concern me. The Gender Employment Non-Discrimination Act is one issue that's dear to me. Here in New York State transgender employees can be denied employment or be fired from their jobs just because they are transgender. I have other concerns but this one is really important to me.

I look at the new year as beginning with a clean slate. It's the chance to start over and achieve those goals we never accomplished or forgot. Think positive! You can do it.
Posted by genevieve at 1:39 PM No comments:

Always be yourself, express yourself, have faith in yourself, do not go out and look for a successful personality and duplicate it.

I will say that 2013 went by very, very fast. Much has happened for me, personally. I was out more than ever enjoying life. My wife accepts me 100% as transgender. I never danced so much in my life as I went a couple of parties, a wedding reception and my first prom.

I am happy about the many achievements accomplished in the trans community. I will list some in a future post. The increased visibility has had helped people see that we are human and deserve respect and dignity. At the same time, those who seek to erase us from existence have increased their attacks on us. I attended Transgender Day of Remembrance last month and still remember the evening as if it was yesterday. It renewed my commitment to see the Gender Employment Non-Discrimination Act become law here in New York State.

As 2014 comes upon me, I will continue to educate people about our role in the Stonewall Riots in 1969 and other events. I have a degree in education and always believe that I would not teach in a conventional way. May be this is what my calling is.
Posted by genevieve at 6:13 PM No comments:

I find myself having to give history lessons about the role transgender people played in the 1969 Stonewall Riots. There are powerful forces who want  to erase our participation in these events. I've taken it upon myself not to let that happen. 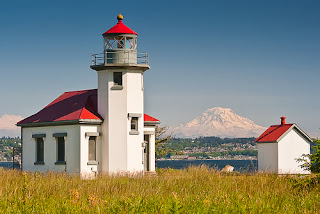 The 38 foot structure is located on Puget Sound in Washington state on the easternmost part of Maury Island. I love the view of the mountain in the above photo.
Posted by genevieve at 9:35 AM No comments:

We are more frightened than hurt, and we suffer more from imagination than from reality.


~Lucius Annaeus Seneca, Roman Statesman (5BC-65AD)
Posted by genevieve at 8:45 AM No comments:

It will shortly be time to set goals for 2014. I have accomplished some goals this year, some others haven't been met. Just have to get at it and try again. I will let you know what they are when I have them.
Posted by genevieve at 7:46 PM No comments:

Many Reasons Transgender Rights Are Behind In The Equality Race

I was reading an article about how transgender rights is twenty years behind gays and lesbians rights. What the article neglected to say is why. Well, I'll highlight a few.

At the Stonewall Riots in 1969, it was transgender people and drag queens who stood fat the police. Later, when the leadership positions were secured by predominant middle class, white gay males, transgender people were shunted to the margins. Why? We didn't look 'presentable'. It was feared that we would hurt the movement for equality. To this day I fail to see how.

Many gay and lesbian groups threw up roadblocks so we could not join their organizations. Trans people had a difficult time during seventies and eighties getting the resources that they needed. In my mind, groups like TERF and people lie Janice Raymond are complicit in the deaths and suicides of transgender and gender variant people. Strong words from me but I stand by them.

I find even more disturbing is that our history(and especially people of color) is being whitewashed and erased regarding our involvement in Stonewall and other movements. I'm proud of my trans history and we should be. I'll be damned if that's going to happen.
In the drive for marriage equality, transgender rights were either ignored or 'conveniently forgotten' in the euphoria of the passage of marriage equality. That was the case in New York State in 2010.

Lastly, social and religious institution haven't been receptive to the idea of transgender rights. Misinformation, lies, and fear rule the day.

One thing I don't want to hear is that we were never involved in the fight for equality and respect. At Stonewall transgender people were front and center while many gays slinked back in the shadows.

This is a very touchy subject with me because it didn't have to happen. It's true that many lives have been affected from without; however just as many were affected from within. That, I find disturbing.
Posted by genevieve at 1:19 PM No comments:

I was sharing my transformation with three ladies at church who I know rather well. One of them has a friend who is trans. I was able to share more of my experience with them. When asked if I was happier, I replied in the affirmative.
Posted by genevieve at 3:18 PM No comments:

Success is to be measured not so much by the position that one has reached in life as by the obstacles which he has overcome.

Shreveport, Louisiana is the second city in the pelican state to implement protections for TGLB people. It joins New Orleans as the only two cities in Louisiana to have such protections. Congratulations, Shreveport!

How about it, New York State! GENDA has been on the docket for over a decade now. Time to quit the politics and pass this act.
Posted by genevieve at 12:09 PM No comments:

Two transgender women were killed in Cleveland, Ohio in two consecutive days. Betty Skinner, a 52 year old disabled woman, was found dead in her apartment with head injuries. The next day Brittany Stergis, 22, was found in her car dead from a gunshot wound to the head. There have been no arrests in either case. The news media, as usual, mispronounced the victims' name, referring to their male names instead of their female names.

I understand the fear and concern of the Cleveland transgender community. If anyone has any information, please call the local authorities.
Posted by genevieve at 12:46 PM No comments:

Sometimes our light goes out but is blown into flame by another human being. Each of us owes deepest thanks to those who have rekindled this light.

Posted by genevieve at 3:18 PM No comments:

Transgender Day Of Remembrance was two weeks ago and I'm still thinking about it. It's part of my time of reflection which occurs during this time of year. I'm thankful for many things; family, friends, a roof over my head, health. I'm thankful for being a transgender woman.

Ever year there's progress as transgender people are stepping up and stepping out and working to secure the equality that is rightfully ours. There is much opposition in the form of vitriol, ridicule, misinformation, violence and death. Still we march on, we must continue moving forward. No matter what has been thrown up against us we move forward.

As we reflect this holiday season, let's be grateful for who we are. I'm thankful to be living in a time when many trans people are living authentically. Though change has been slow but it's happening. That, I'm thankful for.

I have been battling high blood pressure the past couple of days. The sudden change in weather (cold to warm) didn't help. I feel better to day than I did yesterday. I'm taking it slow and if it doesn't get better then I'll see the doctor.

I attended a seminar of Rich Dad. I've attended in the past and today decided to take the will taking 3 day seminar in January in real estate investing. It looks interesting and I'm excited about it. I trust that your Thanksgiving was a joyous one. Now it's Christmas season. My granddaughter already told me what she wants. Too bad my pockets aren't unlimited.
Posted by genevieve at 4:23 PM No comments: