Transgender People Banned From Serving In The Military-My Thoughts

When I heard that President Trump banned transgender people from serving in the military service I was alarmed and angry. I had served my country honorably during the Vietnam War era. There were LGBT people in the military There will always be. Many have laid down their lives so people can be free.

I understand that the military wants the best people they can recruit. When gays and lesbians were let go because of their sexuality, it was the feeling that they were mentally unfit to serve. Many of them were in high security positions and performed very well. It left the military in a lurch because each month they had to maintain a quota for new recruits. The people brought in were felons, sex offenders, and other undesirables. Transgender men and women who want to serve will not be able to because they are considered undesirable.

I understand if a person is mentally unfit then the services shouldn't take them but I don't that to be in many cases. Transgender troops are now serving and serving admirably. I hear the military brass, president, and other talk about the cost of medical services for transgender people which is miniscule to the waste the military commits. There are people overseas making millions in non existent jobs under the guise of national security.

There are many transgender people who have served admirably. I am pleased that some military brass and veterans have spoken up against this ban. It's another way to have transgender people become invisible. I served and am proud of my service. I am an intelligent, mental able person who is proud to have been in the service. There are other trans people who feel the same.
Posted by genevieve at 11:13 AM No comments:

You're not supposed to be so blind with patriotism that you can't face reality. Wrong is wrong, no matter who says it.

~Malcolm X
Posted by genevieve at 10:53 AM No comments: 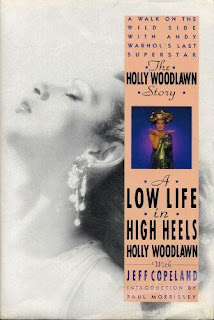 Holly Woodlawn (1946-2015) had a most interesting and wild life. I first became acquainted with her in 1971 when I saw her in the movie Trash while I was on furlough in the military. Her face was one I would always remember even if I didn't remember her name.  Ms. Woodlawn was a superstar in Andy Warhol's Factory which also featured Candy Darling and Jackie Curtis. Holly caroused, drank, drugged, connived, robbed, and finally succeeded in becoming a star. She acted, was a cabaret performer, author, and a personality that was unrivaled. 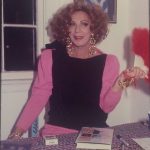 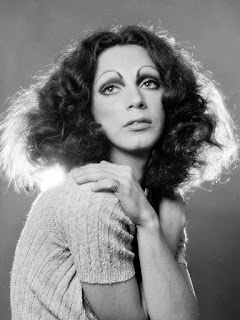 To me, Holly was a survivor of some of her stupid acts (impersonating a French socialite was one which landed her in jail). She was driven mostly by her search to find out where she fit in life. She was a sensitive soul seeking respect as a trans and gender non conforming woman in an era where it was extremely difficult to to do. The late 1960s and 1970s were not as kind to folks like Ms. Woodlawn. 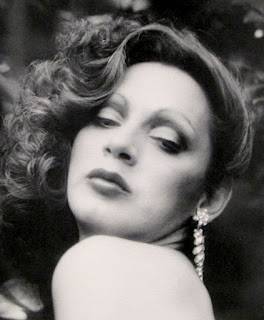 I found  Low Life in High Heels very open and honest about who Ms. Woodlawn really was. I consider here one of my heroines because she opened my eyes to what would happen to me three decades later. Ms. Woodlawn was open of which I was really impressed with. After Andy Warhol's passing in 1987, Ms. Woodlawn was finally at piece with who she was. The wild escapades of her youth ended.

Rest in peace, Holly. I will be eternally grateful for showing me how to be open and honest about myself. 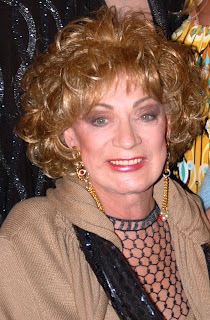 Posted by genevieve at 1:55 PM No comments:


Last week the Transgenerational Theater Project performed at the Brick Theatre in Brooklyn. Below is the spoken word piece I performed.

We Have Always Resisted

Trans resistance is woven throughout the history of humankind.
We have always fought for the right to be who we are.

In ancient Rome, communal living replaced by a patriarchal system that viewed women and minorities as second class citizens. Those who didn't fit in their narrative were demeaned, exiled, arrested, tortured, and sometimes murdered.

Joan of Arc, who was only a teenager, displayed her military skill with some impressive victories over the powers that be. She was burned at the stake because she didn't wear clothing according to her birth gender. Could it be that Joan was killed because a gender non conforming person displayed intelligence, skills, and daring.

In Philadelphia in 1965, one hundred fifty LGBT people of color resisted discriminatory policies by the Dewey Lunch Counter at a sit-in. Management, having previously taken their money, said that they didn't dress or act straight. These courageous LGBT resisted and were victorious in Dewey's changing their policies.

A year later in San Francisco, Compton's' Cafeteria was the scene of a violent protests against police harassment. Trans people, street queens, and hustlers were tired of being pushed around. They resisted and battled police with purses, heels, anything they could get their hands on.

Marsha P. Johnson and Sylvia Rivera, two trans women of color, lit the spark that would become known as the Stonewall Rebellion. People of color, drag queens, and trans people resisted being harassed, beaten, demeaned, and disrespected. It was the burgeoning of the LGBT movement on that muggy June evening in 1969.

We resist being objectified! We resist being denied housing, food, employment, and medical services. We resist against those who call us perverts and deviants. We vehemently resist having our accomplishments erased by those who wish to see us disappear. We have always been here. We are not going away.

I resist against people who want to define me. I define myself! I am a woman! I am not here to tickle your fancy or be your puppet. I am a human being! I am a woman!

We have resisted all our lives. We will continue to resist!
Posted by genevieve at 12:23 PM No comments:

The world is a better because you are here.
Posted by genevieve at 8:52 PM No comments:

Tonight I performed with the Transgenerational Theater Project at the Brick Theater in Brooklyn. About twenty of us trans and non conforming people sang, acted, and danced. I did a spoken word piece titled 'We Have Always Resisted.'

Posted by genevieve at 8:25 PM No comments:

It's amazing how some want to erase my existence as a trans person. Perhaps they are afraid because I choose to live authentically in a cookie cutter world. The world craves for authenticity and yet tries to suppress those who do.

It isn't easy being authentic then again life isn't easy. By trying to be something I'm not is stressful and unfulfilling. At the end of my life I want to say that I lived the life that I was supposed to.
Posted by genevieve at 9:53 AM No comments:

If we don't end war, war will end us.

Well, a half a year is on the books. Much has happened. A lot is hapening as I post. What I am saddened by is the level of animosity there between differing group. It' s more like tribal warfare and this dangerous.

I mentioned shortly after the presidential election that people will need to sit down and listen to each other. Seems that no one is willing to do that. Meanwhile the issues that need to be worked on are being ignored because of partison politics. People are still mad because Trump the the election. There arguing, anger, fear, desparation, and a sense of hopelessness.

If there's one thing we don't need is people folding up the tent and leaving. People will need to work on the items that concern them. It may be the environment, homelessness, prison reform, teaching children to read and a myriad of other things. The point is to take courage and act. The times will be tough but we need to be tougher.
Posted by genevieve at 6:27 PM No comments:

Happy 4th of July!
Posted by genevieve at 8:45 PM No comments: