Dress your best...and if anyone finds that perfect black dress, let me know.
Posted by genevieve at 7:06 PM No comments:

Of all the qualities that are revealed when groups come together for a cause, perserverence consistently comes front and center.
Posted by genevieve at 11:56 AM No comments:

I am fascinated by the make up of the first Christian church. There were people in attendance who were not normally welcomed in other religious settings. There were women, the poor, the lame, gay, lesbian, bisexual, transgender, tax collectors, robbers..you get the picture. Jesus opened up the way when He died on the cross for our sin and broke down the barriers that separated people.

It didn't matter if you were Jew, gentile, male, female, rich, poor, reputable or had a reputation of ill repute. Many came to the first church because they were inclusive of everyone. This was quite radical in the patriarchial society of that time.

I have no doubt that there LGBT people there too. I believe that this is the type of church that is needed today. All inclusive of every one regardless of gender expression, sexuality, or race. The way I see it, it is the Christian church that can set the tone for including transgender people in their congregations. There are transgender and gender variant people who need love and acceptance. They need someone to share with them that they are loved and that God loves them. God hasn't called me to the ministry but I look forward to a day that the church is truly ALL inclusive.
Posted by genevieve at 7:51 PM 2 comments: 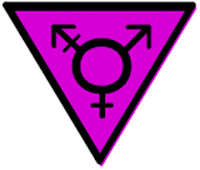 With the passage of same-sex marriage bill in California, it serves to remind me that it affects us transgender folks too. Though ENDA failed to pass, it cannot stop us fro the pursuit of our goals and equality. Many in society have the mistaken notion that we seek special rights. I have heard this before because as an African-African the same stuff was said about us. If the Constitution deems all men (and women) are created equal, then it's high time this lofty ideal was put into practice.

If a group of people are denied basics rights, the powers that be will find some other reason to deny another group of its rights. An example is the profiling of men from south east Asia and the middle east. Thousands are being held in prisons all over the world just because of who they are. Transgender folks suffer discrimination and marginalization for the same reasons.

One reason I believe Republicans can come back is that they think long term. They raise funds and awareness on a few causes and get out to the public. When the lose an election or a goal is failed, they assess what went wrong, regroup and then move ahead. I do admire this strategy. We transgender and gender variant people need to do the same thing. The passage of this bill in California took hard work, getting out in public and perserverence. This is something that we have to do.

I am making it a point to be out more in public and become involved in change. It may also mean that I will express my cross gender status to others. I meet more GLBT folks in groups outside the umbrella and I'm heartened. Now if it can translate into equality and respect.

Genevieve
Posted by genevieve at 4:07 PM No comments:

BE WHO YOU ARE. NO ONE CAN LIVE LIFE FOR YOU.

Yesterday, I was chatting with a woman about a project she is working on. I saw a copy of 'Center Happenings', a magazine put out by the local LGBT center, in her bag. I remarked that I read it also. As we conversed she revealed to me that she is lesbian. I told her that I am transgender. she talked for a half hour sharing our experiences, stories, and backgrounds. It's wonderful that I met a lovely and creative lesbian woman at the same place that we volunteer. I feel more open now about my transgenderism in this setting. I haven't told anybody yet but I'm looking to produce some short stories and poems about what it is to be transgender. That conversation really made my day.
Posted by genevieve at 10:52 AM No comments:

With each passing day, I see the day when transgender people will secure their rights.
Posted by genevieve at 4:34 PM No comments:

I have been wearing a skirt the past week. My son's girlfriend saw me wearing it today. I could hear her laughing in the next room. Ah, well. Another barrier broken. I feel so comfortable in them.
I have had time to reflect on transgender issues and LGBT in particular. While progress has been made there's still much to do. Generally, as in all struggles, there are common threads that run through all parties involved. Some are out there and known to all concerned. Others are not so discernable. Then there are those threads which are there and need to be dealt with. These are the ones I will touch on.

The first is that there are many people who still do not know what transgender is. There are some who do understand what transgender is about, there are many more who do not. What gets me is that some refuse to discuss the matter and choose to remain ignorant. Education is still needed on the part of school officials, parents, legislators, prison officials, and the general public.

Second, those who perpetrate bigotry and hate will, in the future, confront it face to face. A number of our social institutions were responsnible for countless suffering of slaves, women, Native-Americans and now transgender people. I am a born again Christian and the vitriole spewed against LGBT folks from so-called Christians is very repulsive. Some of these churches are realizing that there are LGBT people in their midsts. Certain denominations are having to deal with allowing LGBT folks to be ordained, married, lay ministers, teachers, and worshippers. Schools are having to deal with LGBT boys and girls. Yes, we're everywhere.

I have so much hope for our young people because many choose to be who they are. Many schools across the country have LGBT organizations to help the students. As an older transgender person, this brings me much joy. Change can be a positive. I believe many institutions would be enriched by the many contributions , skills, and talents of LGBT people. I pray that someday they will recognize this.
Posted by genevieve at 12:43 PM No comments:

For every person that rejects us,
there is someone who will accept as we are.
Posted by genevieve at 6:00 PM No comments:

For the past four days I have worn a skirt around the house in my wife's presence. I wouldn't have been able to do this a year ago. We have never prevented each other from doing the things we love in our 28 years of marriage. I love her for that. I have shared some more things about being transgender over the past few months. I feel freer to be who I really am.

I have realized how comfortable I am wearing women's clothing. I have been comfortable with my transgender identity for nearly two years, but now more so. I have a saying 'Never let others define who you are' and I live by that credo. I don't care what society thinks about me. I love all my brothers and sisters in the LGBTQI community. Nothing will separate me from that.
Posted by genevieve at 3:45 PM 1 comment: