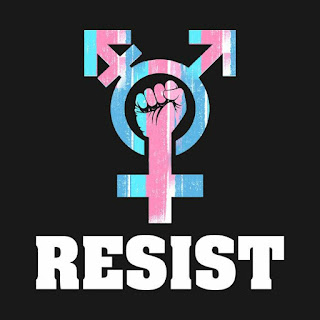 I have had this symbol for at least two years. It states on my blog 'Not completely male and not completely female. I have a male body and a female brain. There have been occasions when this feeling has been very strong. Having embraced my queerness, I crossed another threshold.  I believed that I was queer however me acknowledging it publicly made a marked difference in how I perceive myself.
The resist slogan has a twofold meaning. I will resist anyone who discriminates against the transgender community. You can bank on that. The second meaning is to resist the negative vibes some will hurl in my direction. I'm fortunate that I have never felt guilty or ashamed about being transgender. I was liberated from what society says that I should be. I was also completed as a person. I have never been happier.
There won't be a pride parade here in New York City this year but I don't need a parade to express my joy and happiness of being a transgender woman. That will never abate or change.
HAPPY PRIDE!
Posted by genevieve at 11:51 AM

Listen to internet radio with Genderpearls on Blog Talk Radio