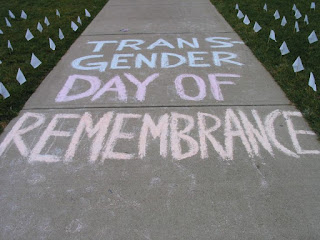 Transgender Awareness Week has concluded. Forty-one transgender and non-conforming sisters and brothers murdered in the United States. This year's Transgender Day Of Remembrance vigil was emotionally draining for me.
I attended two vigils. The one I went to yesterday also presented TGNC who committed suicide. One person was just sixteen. I was personally affected five years ago by the suicide of someone I met just two days prior. It's very sad that a person resorts to this simply because she/he cannot live in the gender/identity they really are. It's disconcerting when, reading the names of the deceased, the person you read was just seventeen years old.
Looking ahead, attacks against transgender and non-conforming people are being ramped up. Our soon to be ex-president gave permission to homophobes, transphobes, and racists to unleash their hatred and vitriol. How many more lives will be lost because people are so blinded by hate.
Transgender and non-conforming have been around since life began. we will always be around no matter what. It's high that society, politicians, and law enforcement understand that we ask to be treated as human beings.
Posted by genevieve at 3:37 PM